In this release we focused on improving the performance and now our data input pages load significantly faster. There were many new features and improvements aiming to improve user productivity including for instance advanced LCA completeness and plausibility checker, more advanced BIM import settings and more. We also launched a new tool that allows quantifying building circularity impacts and visualizes them. For more information on the previous major Revit update, click here.

New circular design tool is now available. It allows tracking, quantifying and optimizing the circularity of materials sourced and used during the building life-cycle, as well as the circularity at the end of life. It allows getting a holistic picture, as well as detailed breakdown per material type. It also supports applying Design for Disassembly and Design for Adaptability principles. This tool can be used for HQE Economie Circulaire, London Plan Circularity Statement, Ellen MacArthur Foundation Circularity Indicators as well as other circular design purposes. 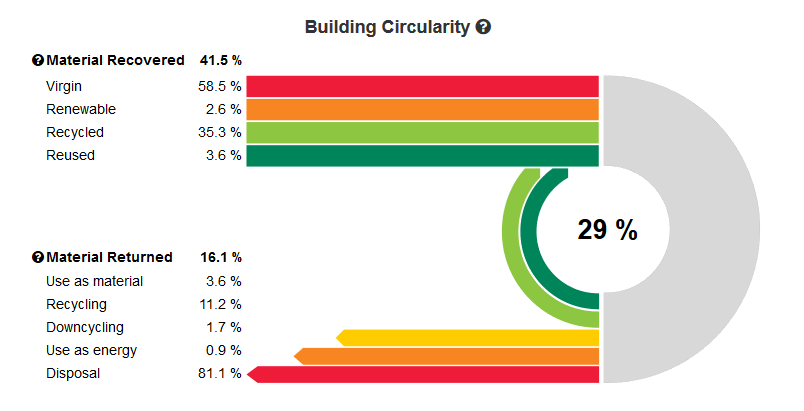 Calculation scope is now declared per design, not per project. This helps projects working with BREEAM UK or multiple certifications and analysis scopes. As part of this, the scope declarations move from LCA Parameters query under the new Add/Modify design dialogue. The scope is also now visualized in your materials query. This is only applicable to buildings, not infrastructure.

When a scope is defined as not applicable, this is reflected in materials query as a visual reminder.

Material input detailed settings (like transport distance and service life) in materials query are now shown as clickable text as opposed to dropdown menus (once saved). This helps make pages load faster and makes them also visually lighter to read. You can always edit the values by clicking them.

Resource additional parameter input fields have been made clearer and more compact.

The result build-up pie charts now contain the percentages of total for each contributing part.

Locking a design now asks, if also all the default settings shall be stored as permanent values. If you choose this, and default settings change over time, they will not affect previous calculation. However, this may be a disadvantage if you would need to rebase your calculation later on.

This will allow you to easily document your compliance and decisions during the project in one place. 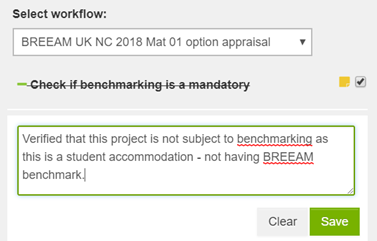 Carbon Heroes Benchmark visualisations have been redrawn for clarity and format

To make finding any potential issues with the calculations, the automated mandatory scope checking (e.g. for completeness against BREEAM requirements) and the plausibility checks relating to the LCA inputs and results are combined to a single Scope and plausibility checker. To make using this information more useful, this is available both in materials query and results page (Business license). This contains pre-configured checks for all different BREEAM schemes for example.

Users can remove their own mappings directly, or report auto detected mappings from previous  work from other users if they think they are not correct in the import mapper ambiguity resolver. This is only possible for pre-existing mappings.

Users can view the mapping explanation for any imported datasets under “BIM traceability” feature.

Users can lock rows of data to prevent them being overwritten in import. Lock will also prevent editing. This is particularly useful if you have for example added data that is not coming from BIM.

Expert plan users get now at no additional charge the following features “Carbon data/3D for BIM” and “Local compensation row by row adjustment”.  These features are not available otherwise. Local compensation allows changing the sourcing location for a specific material. It will show as “Not needed” for all materials that are already representing the local region. “Carbon data/3D for BIM” allows completing LCA and getting the results directly in BIM tools supporting the feature (currently Revit).

This software release enables several important improvements for Carbon Designer, including choosing different default materials for constituents per region. Very shortly following this release we are releasing associated updates for Carbon Designer defaults, including setting the new fixed Lavkarbonklass B concrete as the default for all Norwegian reference building results as well as setting the general European reference buildings to use concrete with 10 % recycled binders. This update shall be documented in Service Update Log when available.

Energie Carbone tool data entry is now automated by populating the organisation details from the organisation profile (if defined). The tool is also now working with all SAVE configurated FDES files, also ones including spacebars in environmental impacts. The generated files are also now updated.

Over 300 installations datasets and 700+ other datasets

This release increases the much demanded building technology datasets by approximately 300 datasets, also including 12 generic and simplified building level systems.
Construction materials updates for the release are being finalized and are available before end of March. The materials updates will provide circa 700 new datasets. The updates cover INIES, BRE, EPD Ireland, EPD Norge, RTS, ITB, Environdec, ZAG, IBU, Earthsure, MRPI, NRMCA, SCS Global, OKOBAU.DAT, and One Click LCA generic database. Also some 50 energy resources have been added or updated, and several useful additional attributes have been enabled for materials.